Can I add insulation to a fire-tested assembly that wasnt tested with it? Does it make a difference where the insulation is placed within the depth of the assembly? 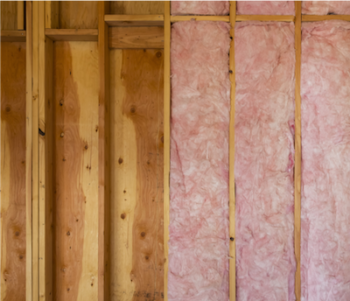 The general rule of thumb when using an assembly that wasn’t tested with insulation is that it’s ok to add it for walls but an additional ceiling layer of gypsum is required when adding it to floor/roof assemblies. Below are several references to support this.

The addition of mineral fiber insulation in any thickness and with and without facers is permitted in the stud cavities of any wood stud or steel stud wall assemblies described under the U300, V300, W300, U400, V400 and W 400 series of wall designs.

When not specified as a component of a fire tested wall or partition system, mineral fiber, glass fiber, or cellulose fiber insulation of a thickness not exceeding that of the stud depth shall be permitted to be added within the stud cavity.

When using the component additive method option in IBC Section 722.6, an additional 15 minutes of fire resistance is allowed when including insulation batts in walls; however, no such allowance is provided for floors/roofs.

Unless specifically described in the individual designs, the addition of insulation in the concealed space between the ceiling membrane and the floor or roof structure may reduce the hourly rating of an assembly by causing premature disruption of the ceiling membrane and/or higher temperatures on structural components under fire-exposure conditions.

Other methods of adding insulation in the plenum or joist cavity are not permitted unless indicated in the individual designs.​​

In floor-ceiling or roof-ceiling systems, the addition or deletion of mineral or glass fiber insulation in ceiling joist spaces could possibly reduce the fire-resistance rating. The addition of up to 16-3/4 inches of 0.5 pcf glass fiber insulation (R-40), either batt or loose-fill, to any 1- or 2-hour fire resistance rated floor-ceiling or roof-ceiling system having a cavity deep enough to accept the insulation is permitted provided that one additional layer of either 1/2 inch type X or 5/8 inch type X gypsum board is applied to the ceiling. The additional layer of gypsum board shall be applied as described for the face layer of the tested system except that the fastener length shall be increased by not less than the thickness of the additional layer of gypsum board.​

Placement of the added insulation within the depth of the floor cavity is also important and, most notably, has an impact on the required maximum spacing of resilient channels if present. For example, assembly UL L521​ states the following regarding resilient channel spacing: