Do wood-frame buildings need to account for thermal movement? 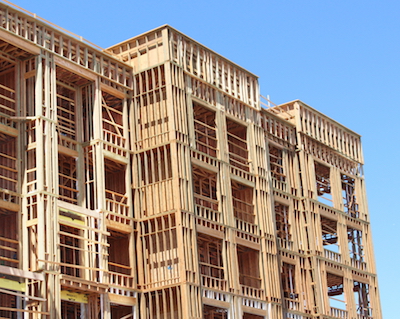 The general consensus is that designers of wood-frame buildings do not need to account for thermal movement, as thermal expansion is offset by the shrinkage of wood due to increased temperatures and moisture loss—which designers do need to consider.

While concrete and steel buildings are typically designed with expansion joints to account for thermal movement due to environmental temperature fluctuations, wood has a significantly lower coefficient of thermal expansion. Wood can experience dimensional movement with temperature changes. As noted in Chapter 4 of the USDA Forest Products Lab’s Wood Handbook, “The thermal expansion coefficients of completely dry wood are positive in all directions; that is, wood expands on heating and contracts on cooling.” However, moisture fluctuations impact dimensional movement of the wood at the same time.

Wood is hygroscopic, meaning it has the ability to absorb and release moisture. As this occurs, it also has the potential to change dimensionally. Note that the above excerpt from the Wood Handbook references completely oven dry wood (0% moisture content, or MC). Wood used for the structure of a building isn’t completely oven-dry during or even after construction. As wood experiences an increase in temperature, it may experience some thermal expansion, but there is also a loss of MC. The shrinkage due to reduced MC is more significant than the expansion due to increased temperature; therefore, the net result is shrinkage. The following section from Chapter 4 of the Wood Handbook explains this:

“Wood that contains moisture reacts differently to varying temperature than does nearly oven-dry wood. When moist wood is heated, it tends to expand because of normal thermal expansion and to shrink because of loss in moisture content. Unless the wood is very dry initially (perhaps 3% or 4% moisture content or less), shrinkage caused by moisture loss on heating will be greater than thermal expansion, so the net dimensional change on heating will be negative. Wood at intermediate moisture levels (about 8% to 20%) will expand when first heated, and then gradually shrink to a volume smaller than the initial volume as the wood gradually loses water while in the heated condition.”

While accommodating thermal movement isn’t generally considered necessary, it is recommended that designers of wood-frame buildings account for expansion during construction due to increased moisture exposure. It is especially important to consider expansion of wall, floor and roof sheathing. Because panel products start at a low moisture content (~8-12% MC) and are directly exposed to the elements during construction (in many cases increasing to >19% MC), the expansion of these products is likely to be more pronounced. Panel buckling, which occurs when there is no room for panel expansion, is prevented with a standard 1/8-inch space between all sheathing panel edges and end joints as recommended by APA in Technical Note D481N Minimizing Buckling of Wood Structural Panels. In larger buildings (over 80ˈ in length), it is recommended to increase the gap between panels and take additional construction sequencing precautions to avoid panel buckling. The WoodWorks paper, Accommodating Shrinkage in Multi-Story Wood-Frame Structures, discusses this, as does technical note U425 Temporary Expansion Joints for Large Buildings from APA.