What is the impact of wood stud size and spacing on the fire-resistance and acoustical performance of a wall assembly? Can stud sizes and spacing be altered from those in tested wall systems?

Interior wall partitions in a wood-frame building—such as unit demising and corridor walls in a multi-family project—must meet several design objectives simultaneously. Two primary functions are fire resistance and acoustical separation. Having to cite two tested wall assemblies, one for fire-resistance endurance results and another for acoustic results, is common. However, matching components between the two tested systems can be challenging, and the architect may want to slightly alter the wall stud size and/or spacing of one of the systems to meet specific project needs.

For example, a corridor wall that requires a 1-hour fire-resistance rating and STC 50 acoustical rating will be constructed of 2×6 studs at 16″ o.c. with resilient channels on one side, and one layer of 5/8″ gypsum wallboard on each side. Is it permissible to demonstrate the fire-resistance rating (FRR) of this wall assembly with a tested assembly that included 2×4 studs instead of 2×6 studs? If the acoustical test being cited also included 2×4 studs, what is the acoustical impact of constructing the wall with 2×6 studs?

Similarly, a unit demising wall will be constructed of a staggered stud wall system, each row having 2×4 studs at 24″ o.c. alternating on each side of 2×6 top and bottom plates. However, to meet structural demands, each row must have 2×4 studs at 16″ o.c.. What impact does this reduction in stud spacing have on the fire resistance and acoustical performance of the wall?

The size of studs is a minimum unless otherwise stated in the individual designs.

The spacing of studs is a maximum unless otherwise stated in the individual designs.

Spacing between parallel rows of studs are minimums unless otherwise stated in the individual designs.

However, from an acoustical perspective, reducing stud spacings usually results in lower STC values. For example, a double stud wall system with a single layer of gypsum wallboard on each face results in an STC of 56 with studs at 16″ o.c. and an STC of 60 with studs at 24″ o.c. This is based on the acoustical design principle that more separation between finish and structure results in less noise passage through the assembly. (This is also why resilient channels are effective at reducing the amount of noise that travels through an assembly.) Greater stud spacings equal fewer connection points between gypsum wallboard and wood studs, which equals more separation and less noise transfer. Also, the larger air cavity volume associated with greater stud spacings (an air cavity that is usually filled with noise-absorbing materials such as batt insulation) can improve its acoustical performance.

The impact of stud size on acoustical performance is less noticeable. Most acoustically-tested partitions used 2×4 studs. Many current wood-frame projects are using 2×6 studs for structural needs. Although a slight reduction in acoustical performance may result from the deeper (and therefore stiffer) 2×6 studs, this may be offset by the improvement realized by deeper insulation within the stud cavity. Design teams that want to make modifications to an acoustically-tested wall assembly are advised to consult with an acoustical consultant. 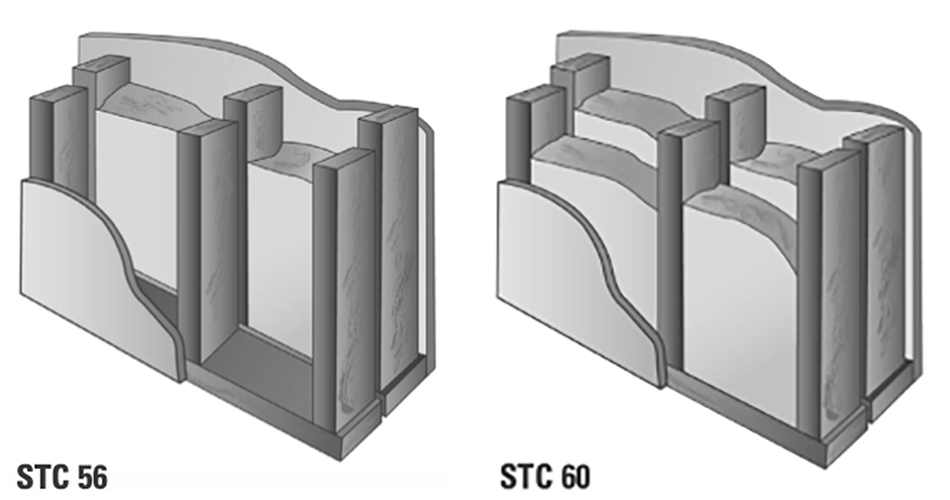 This leaves the challenge of finding the exact wall assembly for a given project, at least in terms of stud spacing (and in some cases stud sizes). There are many sources for fire- and acoustically-tested wall assemblies such as the UL Directory, Gypsum Association Fire Resistance Design Manual, American Wood Council’s DCA3 – Fire-Resistance-Rated Wood-Frame Wall and Floor/Ceiling Assemblies, and many documents published by insulation and gypsum board manufacturers.

To lessen the burden of finding tested wall assemblies that demonstrate code compliance with fire and acoustical requirements and also match the needs of a project, design teams have the option of consulting with an acoustical engineer. This can be especially beneficial when the exact wall assembly has not been tested but similar systems have. IBC 1206.2 and 1206.3 allow the acoustical performance of assemblies to be “established by engineering analysis based on a comparison of walls, partitions and floor-ceiling assemblies having sound transmission class ratings as determined by the test procedures set forth in ASTM E90” for STC ratings or ASTM E492 for IIC ratings.

Another common modification to fire- and acoustically-tested wall assemblies is the addition of wood structural panels to allow the wall to function as a shear wall. For information on this type of addition and the implications, see the following expert tips:

Can wood structural panels be added to an acoustically tested wall assembly?

For additional information on the acoustical design of wood-frame assemblies, see the WoodWorks publication Acoustical Considerations for Mixed-Use Wood-Frame Buildings.